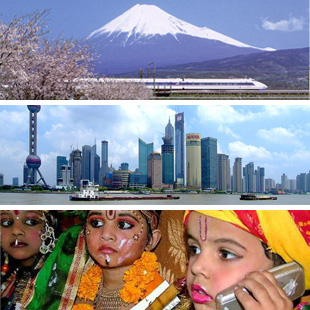 Asia has been the home of the ancient civilizations of China, Japan, India, and today houses roughly half of the human population of the world. In addition to to the cultural legacies of these centers, these societies have in recent decades undergone sweeping transformations which have granted them a growing economic and political importance, to the point where the twenty-first century is ocassionally referred to as "The Asian century".

Furthermore, Asia has been growing in its importance for the Middle East and for Israel. Israel maintains diplomatic, economic, military, technological, and scientific relations with most Asian countries, as well as a flow of lively tourism. In the recent decade and a half such exchanges have flourished following the establishment of diplomatic relations between Israel and India, China, Vietnam, South Korea and Mongolia.

The department currently grants first degrees in Asian Studies, wherein students focus on China, Japan, or India complemented by courses pertaining to Korea, central Asia, and other areas of Asia. Studies include history and culture, society and economy, politics and international relations, psychology, philosophy and art of Asia while clearly emphasizing modern times. The department aims to grant students in-depth academic knowledge and prepare them for different potential careers related to Asia in the private, public, and non-profit sectors in areas such as economics, commerce, diplomacy, education, communication, tourism, and research. The department's faculty are among Israel's top researchers of Asia especially as pertains to modern topics.

The Department of Asian Studies I University of Haifa I Mount Carmel Haifa 3498838 I Phone :04-8288501  asian-studies@univ.haifa.ac.il
Build & Designed by Computing Division - Faculty of Humanities - Contact : Roni Mizrahi Designed by Freepik